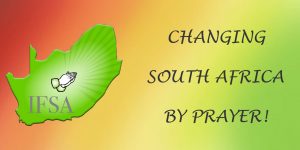 IFSA is led by a strategic team of well known leaders in the nation, with a heart to see the Kingdom of God manifest in SA, through the 7 Mountain Principle.

In a consultative conference that was held by different prayer networks (18 in total – 8 national, 5 Provincial and 5 local) in Bloemfontein, South Africa on the 17-19th November 2016, the following resolution was made:

That a united prayer initiative called Intercessors for South Africa (IFSA) be established. IFSA would serve as a platform where all prayer networks in the country can come together to pray and strategise for various national issues in pursuit of a transformed nation under the Lordship of Jesus Christ.  IFSA works to strengthen relational bonds among all existing prayer networks in South Africa whilst continuing to encourage unity in expressing the uniqueness of each of our gifts. The heart of IFSA is not to do away with all other intercessory networks but to encourage unity while promoting liberty and freedom of each individual network to do what God has called them to do.

There are no upcoming events.